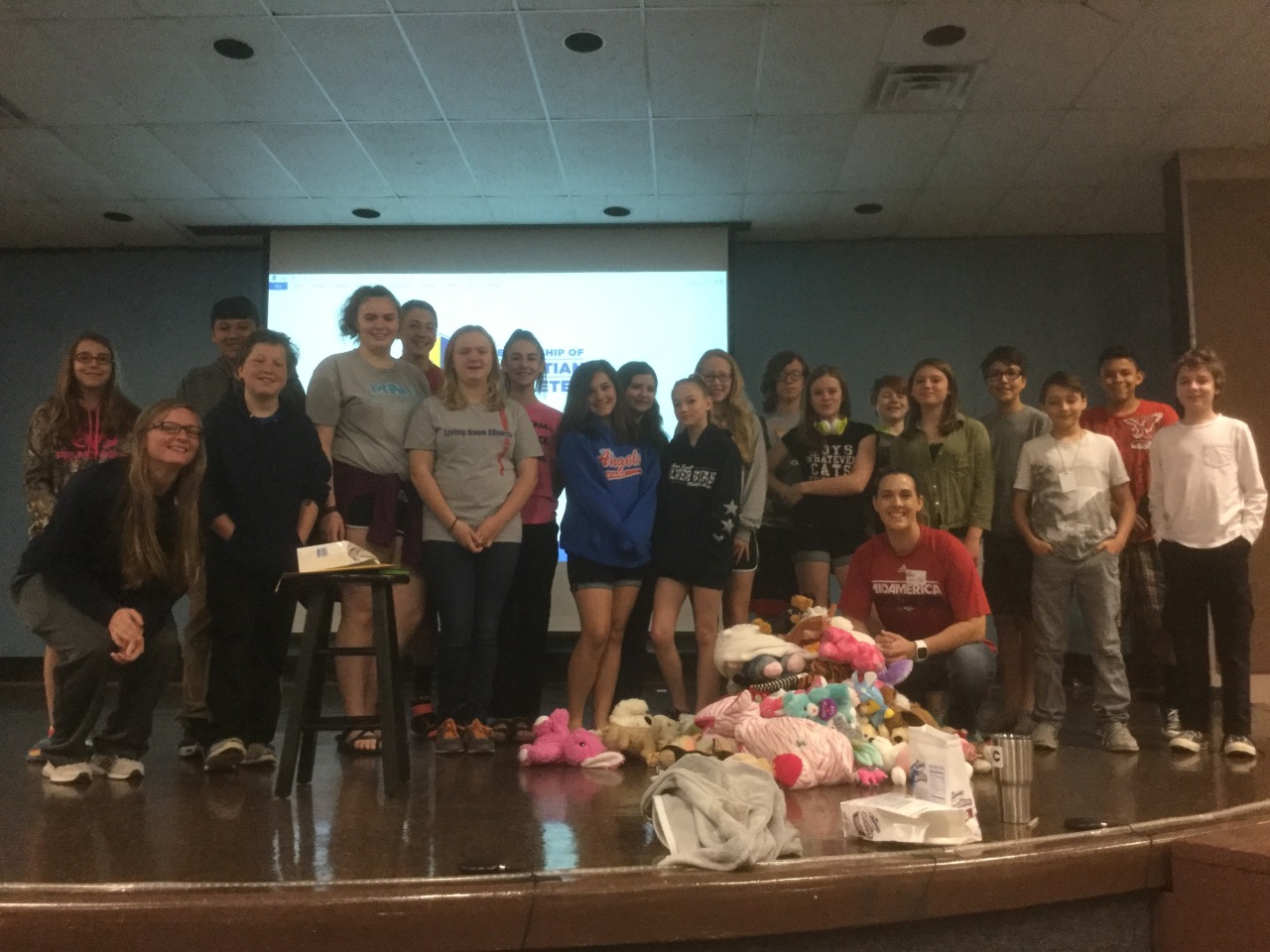 Core scripture: “Have I not commanded you? Be strong and courageous. Do not be frightened, and do not be dismayed, for the Lord your God is with you wherever you go” (Joshua 1: 9).

Message: Do you ever have those students that somehow miss your classroom yet you find a way to build a relationship with them anyway?  Sometimes that relationship blossoms to a point where you say things like I wish I had a chance to teach that kid.  God knows I can’t have all those gems out there.  That would be impossible!  It is a given fact that with two 7th grade Language Arts teachers in my building, half of them will miss my classroom.  I always ache inside when I think about how much I could have enjoyed mentoring them, but then I look at the bigger picture.  God’s plan is so much bigger.  It is through His mysterious plan that I have found numerous relationships through sponsoring Fellowship of Christian Athletes (FCA) in my building.  That is where I met Kimberlynne this year.

FCA has been around for three full years in my school.  A mature 8th grader, Kimberlynne had been there the entire time, yet it wasn’t until this year that her crazy schedule opened where she could bless others with her presence.  I had barely even met her before.  As the 2016-2017 year kicked off, she immediately began to make her mark.  The kids loved her.  They respected her presence—especially the younger ones—and by the time Kimberlynne took the floor to teach her first lesson, it was game on!  Her walk with Christ was so deep, and it oozed from her every word as she quoted scripture and found simplistic ways to connect the Bible to the awkward life of a middle school student.  Like a shooting star, this young lady became a staple of FCA, and her leadership skills skyrocketed as the year progressed.

It was midway through the year that Kimberlynne came to me with an idea for a guest speaker.  Her strength at conditioning coach, Whitney Rodden, had quite a story.  Whitney’s own reliance on Christ was deepened last July 27.  That was when her sweet one-year-old daughter Harper was tragically run over by a truck at the child’s daycare.  It was horrific.  Lifechanging.  But we know our God …  He can take disaster and mold His magic into something bigger.  MUCH bigger.  Ephesians 2:10 states, “For we are God’s workmanship, created in Christ Jesus to do good works, which God prepared in advance for us to do.”  Rodden’s mother-in-law came up with the idea for Harper’s Hugs, a charity that donates new or gently used stuffed animals to local firefighters, policemen, and EMTs.  Suddenly traumatized children all over were getting much needed hugs from stuffed animals.  All in memory of Harper.  All cradled in God’s loving embrace.

And there Kimberlynne was with the idea of the year.  Why not make this a service project?  Why not get Whitney to be a guest speaker for FCA and surprise her with stuffed animals for Harper’s Hugs?  It was genius!  We got right to work.  Kimberlynne created an inspirational iMovie to share with the entire school, and low and behold, stuffed animals began flooding my classroom, making the front right corner resemble Noah’s ark!  FCA kids, students, even faculty combined for a team effort.  We accumulated four enormous trash sacks full and hid them on the back of the stage.  Whitney didn’t have a clue Kimberlynne had done this, and the segue was perfect.  She ended her testimony by saying, “Maybe you all could donate to Harper’s Hugs too.”  God could not have scripted a more heartwarming scene as about 20 FCA students swooped to snag the stuffed animals.  They had to circle through the line twice, maybe three times, to scoop them all up.  Whitney, a hugger herself, wrapped every one of those kids up in her best embrace.  Even some of the older boys were told, “Hug like you mean it!”

I videoed the whole thing with tears welling in my eyes.  None of this would have happened without Kimberlynne.  I cannot count the number of amazing Christian students like Kimberlynne that I have had the opportunity to share my faith with.  I wouldn’t trade my Wednesday mornings at FCA for the world!  This story is just one of countless others that will live in my heart forever.  Most of these moments never would have happened without FCA.  It makes me wonder how many Christian teachers are out there living too safely, not stepping out of their comfort zones.  God called me to take a risk and start this amazing organization in my school three years ago.  By faith I blindly walked off the boat and into the water, not really knowing what would happen.  The results?  Jesus guided me every step of the way, securely holding my hand the entire way.

Can you quiet yourself for a minute?  Listen.  Find a quiet place to cozy up with God, and ask Him where you need to be stretched.  Sometimes we live our lives in bubbles that don’t allow us to realize our full potential.  We get too complacent.  We live our lives as quietly as ever.  Matthew West screams out in his song Do Something, “I don’t want a flame; I want a fire!”  Who will you be: the Christian holding a candle or the Christian igniting a fire, sending smoke signals to only God knows where.  Maybe God wants you to sponsor a Christian camp this summer.  Maybe He wants you to volunteer your time at VBS.  Maybe He wants you to contact FCA to start a new huddle.  Step out of your comfort zone.  Make a difference in the world.  Meet a Kimberlynne and pass the baton of faith on to her.  God will take care of the rest.

(If you happen to be a Christian teacher wondering how the heck to start an FCA organization, would you allow me to guide you?  I can walk you step by step through the process.  Heck, I might even send off another blog this summer just to tell you how easy it would be.  Contact me anytime at theteachersdevotional@gmail.com or visit my YouTube channel at “Mr. Daniels’ Classroom” and search for the “FCA/Christian teacher videos” playlist I created.  I plan on adding videos as time allows this summer.)

Challenge: Prayerfully ask God where He can stretch you and act upon it.  You won’t regret it.  Not a single second.

Song to bring it home: Need a song to get you off your duff and mobilize?  Listen to Matthew West’s “Do Something” and then … well … get out and DO SOMETHING!

Prayer: Lord, open my eyes where I can use my spiritual gifts to bless others.  Get me out of my comfort zone and let me walk on the water as Peter did with Jesus, totally relying on His power.  Amen.